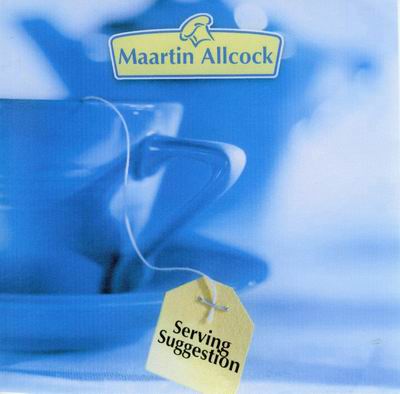 
This, the third solo album from the overly-vowelled Maartin Allcock, a 30 year veteran of the folk scene, ex-alumnus of Fairport Convention and Jethro Tull, delivers a satisfying mix of original and traditional tunes with plenty of dash. Thus, Romanian roots meet radio-friendly prog rock on Murfatlar, Breathnach Reels has the kind of key change that makes you hang onto the person next to you, while New Breton, courtesy of its mighty Tull-like riff is the album's most irresistable foot-tapper. Elsewhere, there's an eerily accurate cover of the King Crimson minor classic Moonchild, and Everything Changes, a big soulful showcase for singer Gilly Darbey, while And There You Are is the album's most personal statement, a tender song of reconciliation and hope. High calibre guests including Chris Parkinson (man-of-the-match on accordion), Paul Burgess, Mick Bennion, John Coghlan and Fairport's Chris Leslie give Serving Suggestion a solid, ensemble feel while Allcock's mastery of the technology - at least as important here as the tradition - ensure that it's still a profoundly solo album. - Rob Beattie

Life is good: there is a new Maartin Allcock solo CD (available only through his website). The former Fairport stringbender serves up a mixed stew of tunes, similar in diversity to his last solo CD. There is the techno-Rumanian swirl of Murfatlar, the hopeful We Will Dance Some Day, and even a classic King Crimson cover, Moonchild. Along the way there are equal doses of hornpipes and jigs, and a lullaby (cleverly titled Lullabye). Many times Allcock plays all the instruments, and he sings (sometimes successfully, sometimes not). But when there are guest musicians, they include such diverse talents as Fairport's Chris Leslie, John Coghlan (Status Quo), Paul Burgess (10cc), and Chris Parkinson. Over the years Allcock has developed into an excellent songwriter, much in evidence on And There You Are, a lovely song dedicated to his son, his father, and a late friend. An album well worth seeking out. - Dirty Linen

An impressive variety of material is a hallmark of this album. All but two of the 13 tracks are by Maartin Allcock himself or are traditionally based tunes that he has arranged. Brooks Williams' We Will Dance Someday introduces Allcock's accomplished voice. A 1960s song from King Crimson is at the more ethereal end of the folk spectrum. The traditionally-based numbers include the opener in which Allcock uses a Romanian folk tune and makes his mark with some fine guitar playing which is inspiring throughout the album. The two Irish tracks are Breathnach Reels led by Chris Parkinson's jaunty accordion and Kerry Polkas featuring Allcock's banjo. A set of hornpipes is given a very contemporary interpretation. Allcock's own compositions are a success. They include Hafelekar evoking an Austrian mountain view with an opening reminiscent of Capercaillie and New Breton that has a rocky feel. The highlight for me though is Everything Changes with guest vocalist Gilly Darbey. She creates an expansive sound complemented by the band with exhilarating drumming by John Coghlan. Other musicians featured on this album are Chris Leslie (violin), Paul Burgess (drums) and Mick Bennion (bass). There will be much here to appeal to a wide variety of tastes. - Andy Jurgis, The Living Tradition.

There are thirteen tracks on the album (including five songs):

1. MURFATLAR 4:16
This is a traditional 7/8 tune from Romania, Geamparaua de le Murfatlar, which I've made my own. Murfatlar is the name of a town in Romania. I wrote a 4/4 middle section for the guitar solo. You can hear my Hammond B3 organ and Mellotron strings and mandolins on this. I found this in Richard Robinson's Tunebook.
Chris Leslie - violin; Chris Parkinson - accordion; Paul Burgess - drums.

3. HAFELEKAR 4:23
I wrote this tune back in 1982. Hafelekar is a mountain at the back of Innsbruck in Austria which you can ascend by funicular railway then cable car. I've been up twice and it's very beautiful. One of those views.
Paul Burgess - drums.

4. BREATHNACH REELS (Trad arr Maartin Allcock) 3:25
The First Month Of Summer
The Curragh Races
Ril Gan Ainm
Three reels from Brendan Breathnach's brilliant collection, Ceol Rince na hÉireann, volume 5. He was employed by the Irish Department of Education to make a complete collection of the traditional music of Ireland. Some task! He noted each tune down on a card, 8" by 5", and by the time he retired in 1977, he'd made 7,000 of these cards! The first three volumes were published in his lifetime and so far two more have appeared since. These tunes all come from the fifth volume. Watch out for the key change between the first and second tunes. Special mention in despatches for Parky!
Chris Leslie - violin; Chris Parkinson - accordion; Paul Burgess - drums.

6. ARDAL GYMRAEG (Maartin Allcock, Soytzer Music Japan) 3:09
A tune I originally wrote for the Sony Playstation game, "Watermarks", where it was named "Polychronicon". I've renamed it "Ardal Gymraeg" which is Welsh for "Welsh-speaking area", because I live in a Welsh speaking area of Wales. I went to college in Harlech and learned Welsh for nine months. If I lived in Spain I'd learn Spanish.
Chris Leslie - violin; John Coghlan - drums.

7. HORNPIPES 4:51
Jim Mulqueenie's (Trad arr Maartin Allcock) / Yr Hen Ddyn Blin / The Sharp Sea
The first tune is actually a reel from Breathnach vol.5, played as a hornpipe. The second tune I wrote one morning when the sun was streaming through the windows curing me instantly of feeling like a Hen Ddyn Blin, a Grumpy Old Man. The third tune is a take on the many moods of the sea which I can see from the front room. Sometimes it looks like it's boiling...
John Coghlan - drums; Mick Bennion - bass.

9. KERRY POLKAS (Trad arr Maartin Allcock) 2:41
First tune unknown / Jimmy Doyle's / Jack Connell's
I heard the first tune while driving near my home on the Irish language station Radio na Gealtachta. One of the perks of living in north west Wales is that we can listen to Irish radio stations. It was such a great tune I had to stop the car and write it down. I don't know the title, as the announcements are all in Irish, which is not one of my languages. The other tunes are from Johnny O'Leary of Sliabh Luachra, a book of traditional tunes from the Cork/Kerry borders, a present from Chris Leslie.
Chris Leslie - violin, Chris Parkinson - accordion, Paul Burgess - drums.

10. MOONCHILD (Fripp/McDonald/Lake/Giles/Sinfield, EG Music) 5:21
A song from King Crimson's first album, In The Court Of The Crimson King (1969). I've always loved it. When I got the Mellotron it was only a matter of time...

12. ARMELLE 2:43
I wrote this little waltz for the wedding of my friend Jean Bouguennec to Armelle back in 1978 but this is the first time it's been recorded.

13. LULLABYE 2:29
Suggested by a pad sound from the EXSP24 sampler in Logic, the recording program I use in my iBook, with a couple of Harlech days in mind.
Night night Jan. Nos da fy Nghariad.

THE PLAYERS:
Mick Bennion is a great young bass player from Banbury whose guitarist dad Ben (Freeway Jam) has been a pal for years now. Mick and his guitarist brother Jim play in TNT, a AC/DC tribute band and they ROCK. They've also been recording at Blue Moon.

Paul Burgess has played drums with 10CC since they started, A fellow Mancunian, he has made loads of records with loads of people and played with Jethro Tull for a few years.More recently he's been touring with Chris Farlowe and we played together in The Reel And Soul Association.

John Coghlan was the original drummer with Status Quo before they became a cabaret act. I met John on "This Is Your Life" for our mutual friend, actor Geoffrey Hughes.

Gilly Darbey is a great singer from Leamington who I've known for twenty years or so. She was in a duo with Keith Donnelly all that time and has just moved to New Zealand.

Chris Parkinson is a great bloke who I have had the joy of touring with this last year or more with John Wright. One of the genuinely funniest men I've ever had the privilege to know and a great musician. Chris was a member of The House Band and has played and recorded with Martin Carthy, Norma Waterson, Ralph McTell, Kieran Halpin and many more.

Chris Leslie should need no introduction. One of life's few real gentlemen, a wonderful musician and a dear friend. My first call for the violin and also my top recommendation for said instrument.

Many thanks to Jan for a new start, song ideas, happy and everything else and to Wendy and Mark Lee for their hospitality. Many thanks to all my guests. Thanks also to Alan Townsend at Sutherland Trading and Crafter guitars.

I use D'Addario Strings exclusively, 'coz they're the best. On this album I used my Stefan Sobell Model 3 guitar, the Line6 Variax, an Ibanez F-type mandolin (a present from Dave Pegg), my 1978 Rob Armstrong fretless bass (my "third arm"), Mark Lee's Fender Squier Precision bass, a Roland JV1000 and an Apple iBook with Logic 6 and audio instruments EVB3, EXSP24, EVP73 and GMedia Mellotron.