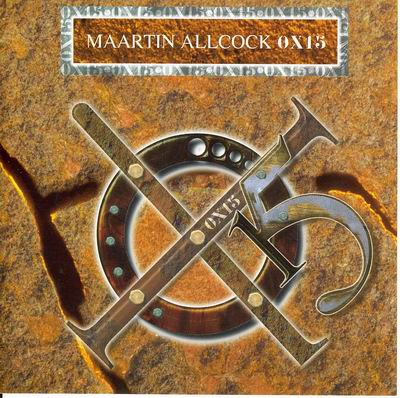 There are twelve tracks on the album (including four songs):

1 DAICHOVO CHARA (based on a Bulgarian folktune)
I got Daichovo Chara from the excellent Richard Robinson's Tunebook which I've raided before. It's a Bulgarian tune in 9/8. This breaks down to 3/4, 3/8. It's like three normal beats and a long one. Mark reckons it's a traditional pint-spilling dance.
Maart - electric guitar, keys; Chris Leslie - fiddle; Simon Mayor - mandolin; Troy Donockley - Uilleann pipes; Gerry Conway - drums and percussion.

2 WHENEVER WE SEE THE DARK
This is my first ever song and I'm very proud to have Ian playing on it. Thanks Ian!
Maart - guitars, keys, bass, vocals; Ian Anderson - flute; Gerry Conway - drums.

3 CRASH POLKA
I wrote this tune after buying a Roland keyboard which had these sound effects in and I made a quick demo cassette of it before taking it down the local (OX15) and playing it to my neighbours. They all started dancing and I knew I was onto something. My late friend, fellow villager and fellow Manchester United fan Geoff Castle said, "That's the funniest thing I've heard in years!" Popular with the very young ones.
Maart - keys, guitar, bouzar, double bass, sound effects, orchestral percussion; Gerry Conway - drums; Anna Frazer - cello.

4 WATERMARKS
I was asked to write some music for a Sony Playstation game, "The Book Of Watermarks", and this is the first tune I wrote for that project. I was hoping to use the original recording featuring Martin Bell (OX15) on fiddle and Maire Ni Chathasaigh on harp but legal stuff got in the way... So here's a more guitarry re-recording which Clive and I did one afternoon while Mark was suffering with the flu. Didn't stop him though.
Maart - guitars, keys, bass; Clive Bunker - drums.

5 CHIMES AT MIDNIGHT (Allan Taylor)
Allan Taylor is an old friend (I hope he still is after hearing my arrangement) who I've played live with and I notated his songbook for him. Chris' solo is typically musical. He lives in OX17. Mark at the studio reckons he's almost too tasteful. It's the first time Gill has had a lead vocal on a record and I reckon she should do more.
Maart - keys, backing vocals; Gill Allcock - lead vocal; Chris Leslie - violin; Gerry Conway - drums.

6 JESSICA* (Betts & Forrest - published by No Exit Music [BMI])
& The Wind That Shakes The Barley (trad arr. Maart)
It was my old mate Fergus Feely's idea to play Jessica in a set of tunes but he never got round to it. This was recorded in the early nineties sometime (I can't find the date) when I was playing quite a bit of MIDI guitar. All the drums, percussion and even the piano were played from the MIDI guitar then I got the scrapers in. It was the first time that the Chris Brothers had played together and they seemed to hit it off straightaway. It was just done for a laugh one day and I just did a rough mix at the end of the day. I recently found a cassette of it and thought it had great spirit and energy. I worried about cleaning it up but then found the DAT. This track is dedicated to Ivor Shawyer, a great pal, sorely missed who was a great guitarist from OX16. I bought my 1968 Gibson Goldtop Les Paul from Ivor who bought it from Mark Bowes (OX15). We were the Gold Guitar Club.
Maart - MIDI guitar, acoustic and electric guitars; Chris Leslie - violin; Chris Haigh - violin.

7 UNTILED**
I wrote this piece for an album to raise funds for the Deddington (OX15) Church roof fund, "Raise The Roof", and I thought it should get out a bit more. It's in 6/4 time, one of my favourite time signatures, and was the first piece I ever recorded with Mark Lee at Blue Moon Studio (OX15) in July 1997.
Maart - electric guitar, bass, keys; Chris Leslie - violin; Nic France - drums.

8 SIMPLE (Kieran Halpin)
This is a song which Kieran wrote in a batch of songs for his album "Jangle" (which Gerry and I played on) and decided not to record. You can do that when you're a brilliant songwriter, I suppose.
Maart - keys, bass, guitars, vocals; Gerry Conway - drums & percussion.

9 BEAN A'TÍ AR LÁR (Trad arr Maart)
This is a set of Irish Reels I got from Brendan Breathnach's "Ceol Rince na hÉireann" (Dance Music Of Ireland) vol.2. The first one, Bean a'Tí ar Lár (The Woman Of The House Is In) is from Donegal, followed by a Gan Ainm (no title) which came from Tommy Peoples and the last one is Cnoc an Arbhair (The Cornhill), from Mohill in County Leitrim. I got two ex-Tull drummers on this one!
Maart - keys, guitars, bass; Chris Leslie - fiddle; Gerry Conway - drums. Clive Bunker - bodhrán.

10 SAND DANCER (based on a Macedonian folktune)
This is based on a Macedonian tune in 22/8 time, again from Richard Robinson's Tunebook. This breaks down into 3/4, 3/8, 3/4, 3/8, 2/4 so it isn't as daunting as that would first seem. When I first played the tune it struck me that it siuted being taken at quite a slow pace so that the beauty of the tune shines out. Anna (neé Swarbrick, no relation) and I were in the Lancashire Schools Symphony Orchestra together but then lost touch until we met in Banbury Sainsburys after tewnty-odd years. She lives in OX17.
Maart - piano; Simon Mayor - mandolin; Anna Frazer - cello.

11 A DREAM (Najma Akhtar & Maartin Allcock)
I met Najma through Robert Plant's management who thought it would be a good idea if we made some music together. We come from totally different backgrounds but share a kindred musical spirit. We wrote and recorded four demo songs together one summer and this is the one which never left me alone. It grew out of a great guitar tuning, DAC#F#AE, and Najma's idea of putting it into 7 time. The last verse and chorus are sung in Urdu.
Najma Akhtar - vocals; Maart - guitars, keys, percussion, bass; Troy Donockley - low whistles; Gerry Conway - drums.

All songs published by PRS/MCPS except where stated.

Maart uses D'Addario strings exclusively, 'cos they're the best.

This album is dedicated to Ivor Shawyer, Geoff Castle and Harvey Ampersand Allcock.

Thanks are due to Dave Rees and everyone at A New Day Records, Mark & Wendy at the studio, Martin Bell, Sir Alex Ferguson, my old music teacher Peter Larkin, Steve Walker at Mac Rescue, Kieran Halpin, Ian Anderson and everyone who played on my album and especially Gill (OX15) for patience and support.